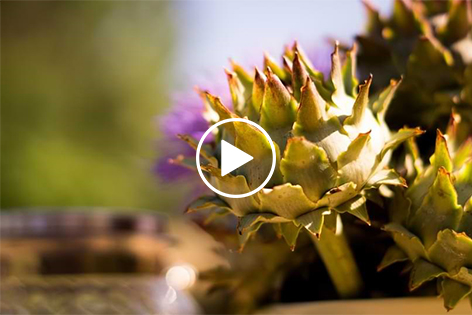 Abstract Artichoke (Cynara scolymus L., Asteraceae family), an edible vegetable from the Mediterranean area, is a good source of phenolic compounds. Two varieties of artichoke were used in this study Green Globe (G) and Violet (V). Five major active phenolic compounds were identified into the aqueous methanolic extracts of artichoke leaves and heads. These compounds were identified as Chlorogenic acid, Cynarin, 1, 5-di-o-Caffeoylquinic, luteolin and apigenin.

On the other hand, the artichoke aqueous leaves extract (ALE) and aqueous heads extracts (AHE) for the two varieties were used as hypoglycemic and hypocholesterolemic experiments by using albino rats. ALE was used in the concentration of (1.5 g/kg/day) for the two varieties. AHE was used in two different concentrations (1.5 and 3 g/kg/day). Rats were administrated orally by these different concentrations. Results show the effect of ALE and AHE extracts on the glucose level of diabetic rats. The superior effect was with G4 (Group No. 4) rats administrated 1.5 g LEG/kg/day (Leaves Extract of Green Globe). On the other hand results of the influence of artichoke leaves and heads as hypocholesterolemic action was in a positive way on the level of total cholesterol and reduced LDL and triglycerides levels and increased the level of glutathione peroxides, meanwhile it reduced the level of malondialdehyde (MDA) in rats serum. G3 (Group No. 3) [HFD (high fat diet) +1%cholesterol+1.5g LEG/kg/day] recorded the best results as hypocholesterolemic effect which could be attributed to their phenolic content. Our results indicated that, artichoke especially leaves extract of Green Globe (LEG) has good action as hypoglycemic and hypocholesterolemic.

Other link – Artichoke is a super food
http://www.oceanmist.com/artichokes/12-unexpected-artichoke-health-benefits/

Provided more evidence that Artichokes and A. Extract:

Artichokes don’t get mentioned much in Health Discussions

This 2016 study examined the mechanisms by which artichoke does this:

These 5 compounds appear to work synergistically to lower cholesterol and glucose.

So, including artichoke heads, hearts and/or leaves in your diet a 2-3 times per week

Maybe wise, especially if wanting to:

Artichokes are low in calories, but filling and can be a healthy substitute for starchy carbs at a meal

Or use them as filling, cholesterol-lowering snack as I sometimes do.

Dr. James Meschino is an associate professor in the division of physiology and biochemistry at the Canadian Memorial Chiropractic College, where he has taught nutrition and biochemistry since 1984. He has also taught the second and third nutrition courses at the Canadian College of Naturopathic Medicine and has been a faculty member of the American Academy of Anti-Aging Medicine and the American Council on Exercise (ACE).  Dr Meschino has authored four nutrition/wellness/anti-aging books, and is the principal educator for the Global Integrative Medicine Academy (www.gim-academy.com). Dr. Meschino has lectured extensively throughout North America and is the formulator for Adeeva Nutritionals Canada Inc – a professional line of supplements dispensed by many healthcare practitioners and natural health product retailers (www.adeevainfo.com).