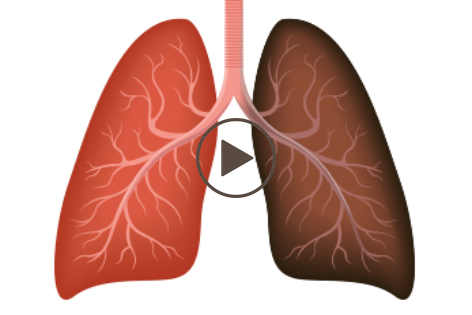 At the 2010 American Thoracic Society Meeting researchers presented the results of a large study showing that vitamin E supplementation was associated with a 10% reduction in chronic lung diseases in women, such as chronic bronchitis, emphysema, or bronchiectasis, including in women who smoked. As the researchers stated, “Regular long-term use of vitamin E supplementation might protect women against the development of chronic lung disease, according to a secondary analysis of the large Women’s Health Study.

The study randomized 39,876 female healthcare professionals to receive 600 IU of vitamin E or placebo (±100 mg aspirin) for a mean of 9.8 years. After excluding patients with chronic lung disease at baseline, the final analysis included 19,299 women in the vitamin E group and 19,298 in the placebo group The results showed that vitamin E supplementation reduced the risk of new chronic lung disease diagnoses by 10% after 10 years of use. The difference remained unchanged after factoring in cigarette smoking, aspirin use, patients’ age, multivitamin use, body mass index, pre-existing asthma, diabetes, high cholesterol, high blood pressure, inflammatory disease, and dietary intake of vitamin C or non-study-assigned vitamin E. “We saw no change in the effect of vitamin E [after adjusting for all these variables], which was quite robust.”  The primary endpoint they saw was a reduction in chronic lung disease, defined as chronic bronchitis, emphysema, or bronchiectasis.

The researchers explained that free radical damage is a contributing factor to many chronic lung diseases leading to COPD (chronic obstructive pulmonary disease) and that vitamin E acting as an antioxidant can help to protect the lungs from free radical damage induced by cigarette smoke and air pollution. They stated that previous observational studies have shown that higher antioxidant status is associated with a lower risk for COPD, but most of these studies were conducted only in men and looked only at a reduction in symptoms. They stated, “lung disease develops, and tissue damage occurs through several proposed processes, including inflammation and exposure to free radicals. Vitamin E may protect the lung against this kind of damage.” The investigators further believe that part of the process might stem from the transport of vitamin E by high-density lipoprotein (HDL) into the lung.  Other studies have shown that combining vitamin E and vitamin C supplementation provides even greater lung protection than vitamin E administered alone. I will review that research in the next Lifestyle Medicine Update.

I always find it bewildering when I see media reports stating that vitamin supplements have never been shown to prevent the development of a health condition. Here we see another clear example that certain supplements can do exactly that.  In this case, even in smokers, they showed that vitamin E supplementation was able to reduce the development of chronic lung disease by 10%, compared to those taking the placebo pill. Of course, not smoking or quitting smoking is critically important for lung health, but it appears that even in non-smokers vitamin E supplementation can help to reduce the risk of lung damage from air pollution and other insults.

I have included the reference for this information in the text below.