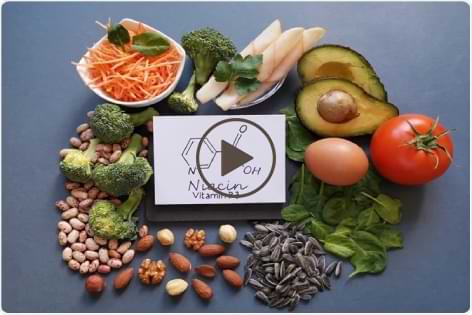 Back in the year 2004, we saw evidence from the RUSH study (Chicago) that a higher intake of the B-vitamin, niacin (vitamin B3) was associated with a reduced risk of Alzheimer’s disease and cognitive decline in subjects over the age of 65. Over the 5-year period, individuals ingesting more than 22 mg per day of niacin from food and supplements, per day, on average, showed much greater protection against memory loss and Alzheimer’s disease than did subjects ingesting 12 mg per day or less of the B-vitamin, niacin. This is significant because the RDA for niacin is only 16 mg per day for men and 14 mg per day for women.

This level appears to be too low to prevent age-related memory loss over one’s lifetime. We have also seen improvements in cognitive test scores and overall brain function reported by European trials using high-dose niacin treatment. Researchers have identified that niacin plays important roles in the brain, which are tied to events linked to the prevention of cognitive decline and Alzheimer’s disease, and thus, niacin treatment has been used in certain trials.

In 2022, a groundbreaking study was published in the journal of Science Translational Medicine, which showed another critical role for niacin in blocking the development of Alzheimer’s disease. In this study, researchers showed that immune cells found in the brain and nervous system, called microglia cells, possess a niacin receptor called the HCAR2 receptor. When niacin activates this receptor, microglia cells spring into action, reducing the buildup of beta-amyloid plaque, which is a hallmark feature of Alzheimer’s disease. Niacin activation of microglia cells in the brain also helps to prevent the death of brain cells, reduces brain inflammation, and in animal models, shows improvement of working memory that had previously been lost. Studies on human brain tissues show that similar actions occur in the human brain when sufficient niacin is present. The bottom line appears to be that microglial cells in the brain need sufficient niacin stimulation each day to help guard against events linked to Alzheimer’s disease development. The amount required appears to be higher than the current RDA, and in practical terms, requires supplementation in addition to niacin derived from food.

For a long time, we thought that niacin was primarily required in low doses for the body to synthesize NAD in the cells, which helps our cells, including brain cells, generate energy. But recent studies show that higher levels of niacin intake appear to be required to help prevent the buildup of the dangerous tau protein seen in Alzheimer’s disease and to remove beta-amyloid plaque from the brain before it becomes involved in the Alzheimer’s disease process. At least, this is what some new studies and researchers are proposing. In fact, pharmaceutical companies are now manufacturing niacin-look—a-like drugs, such as Niaspan,  and using them in animal and human research studies involving Alzheimer’s disease, Parkinson’s disease, and other neurodegenerative diseases. Traditionally, niacin drugs have been used to reduce high triglycerides, and raise good cholesterol (the HDL) in medical practice, but the use of high dose niacin and niacin drugs is now being used more and more in patients with neurodegenerative diseases.  Based on animal models, the human equivalent to help treat early-stage Alzheimer’s disease in humans would be 500 mg per day of the drug Niaspan or niacin in the form of nicotinic acid. Typically, 1,000 – 2,000 mg per day is used to treat high triglycerides and/or low HDL blood levels in cardiovascular disease patients, so a daily dose of 500 mg is well within the safe range.  However, taking a dosage this high requires medical supervision, especially to track liver enzymes tests, as high-dose niacin (1,000-2,000 mg per day) can damage the liver and is contra-indicated in gout and gallbladder problems.

The take-away message for most of us is that getting sufficient niacin each day from food and supplementation on a preventive basis makes good sense and that the RDA level of niacin appears to be too low to exert important anti-aging effects on the brain. This can easily be accomplished by eating a healthy diet and taking a high potency multiple vitamin and mineral supplement each day that contains a B-50 complex, (including 50 mg of niacin or B3).  I have recommended this strategy for many years and for many different reasons. The latest reason is the stimulation of brain microglial cells. Studies suggest that this strategy may help to prevent key steps in the development of Alzheimer’s disease and other neurodegenerative diseases as well.  For patients with early-stage Alzheimer’s disease, Parkinson’s disease, or Multiple Sclerosis, may want to speak to their neurologist about the use of high-dose niacin or a niacin drug like Niaspan, as an additional treatment intervention.